On Thursday night Andels Hotel hosted the Gala Graduate show of the Academy of Fine Arts, otherwise known as the Gala Dyplomowa, featuring top graduate fashion talent. We were ushered to the top floor of the hotel where the warehouse has retained its original huge proportions, big enough for a catwalk and plenty of seating. An utterly fabulous venue, and very convenient too…

Here, in alphabetical order (cos that’s the way it rolls) are the designers that showed:

Kobieta Symetryczna featured sharp tailoring in white, black and beige with highlights in red slashes by Aleksandra Kmiecik, who also shows on the main schedule. I saw parts of this collection last season and you can read my review here.

Eco designer Dominika Naziebly also showed at the Golden Thread Awards: my favourite was wheeled out once again, a stunning red puffball dress. This season she also showed on the Off Out Of Schedule catwalk, review to come shortly.

Zip details and drop crotches were the order of the day at Elzbieta Kapczynska-KC, with a collection titled Zbroja Miejska.

Not speaking a word of Polish, I can’t be entirely sure, but I think that Olga Mieloszyk won the main award. Her Oranzeria collection was amongst my favourites: beautiful and wearable womens and menswear with intricate frills, panelling and pleated details in shades of orange and browns.

All photography by Amelia Gregory.

The show ended with a beautiful selection of sculpted evening dresses in sweetie shades by Karolina Glegula, except I am not sure I wrote down her name correctly: I did my best by squinting at the screen behind the catwalk since there was no information in written form to take away.

Find out more about the Golden Thread Awards in my previous blog post: it was certainly a night to remember: two solid hours of catwalk show!

One feature of the Off Out Of Schedule shows at Fashion Week Poland was that no one checked tickets on the door and there was no one to usher in guests, what is ed meaning that seating was a free for all. I was a little late getting to this show as I’d been upstairs to check out the fashion photography exhibition (more on that later as I discovered some very good stuff) so I had to stand in a poor position, a bit exasperating when you’ve come all the way from London and it turns out that a good position is critical to capture the collection adequately. Marcin Podsiad?o showed black fabric geometric headpieces that completely dominated the all black outfits, meaning that in fact I couldn’t really tell you much about them. Far more successful, as styling goes, were the black blocked lips.

I am sure there were some lovely and very wearable shapes in this show, but in general I always struggle with all black collections, especially when they are shown in such low lighting levels that it’s nearly impossible to make out any detail. I was most interested to discover that Marcin Podsiad?o studied at the University of the Creative Arts and I think he’s actually based in the UK. I wonder if he was roaming the corridors when I taught there?

Categories ,black, ,geometric, ,headpieces, ,Marcin Podsiadło, ,Not Just a Label, ,Off Out Of Schedule, ,UCA, ,University of the Creative Arts, ,Victoria Haynes

The last of Saturday’s Off Out Of Schedule featured the work of Paulina Plizga from Silesia, viagra 100mg a graduate of the School of Fine Arts in Krakow.

Blue smoke, chiming bells and booming bass beats set the atmosphere, but for some inexplicable reason the designer had decided it would be a good idea to dress each model at the head of the catwalk – thereby demonstrating the versatility of her recycled zippered creations, and ensuring that the show took a tediously long time. A garment was carefully removed from one model’s legs and reconvened as a cape on another. Maybe it had seemed like a good and innovative idea in rehearsals but in reality there was barely any light in the smokey gloom and it was a struggle to see what was going on… which made it even more tedious. The looped soundtrack didn’t help matters either.

Despite this I really liked Paulina Plizga‘s collection, which made effective use of upcycled fabrics to create a patchwork collection with ethics at its heart. It was also a rare example of intelligent and interesting styling: models were accessorised with cobwebbed face masks and bin bags on their feet, tangled threads dangling in chaotic patterns. It had real potential to wow.

Wiola Wo?czy?ska kicked off the Off Out of Schedule on Saturday morning with a collection that was a taste of things to come… overly long and massively in need of a serious edit. There was nice styling with side swept hair and calf length socks, more about but it went on… forever… and most of the looks were incredibly similar.

Then one model fell over due to ill-fitting shoes – which was again a precedent for other shows. But oh my was the setting amazing – all the Off Out Of Schedule shows took place in Bielnik and Elektrownia at Podsiad?o Ksiezy Mlyn – a ramshackle old textiles factory that is typical of the fantastic industrial architectural style of ?ód?. It really was a venue like no other I have seen. More photos of that to come…

Whilst I liked the draping, web subtle colouring and asymmetric shapes this show was overly commercial for an Off Schedule event and some of the fabrics appeared to be of poor quality – a big no no on the catwalk. It’s a shame because there really was the kernel of something special here, and if it was more finely refined I could see it appealing to more sophisticated fashion palettes in a jiffy. It’s perhaps no surprise to learn that Wiola Wo?czy?ska is a stylist as well as fashion designer, and has participated in a workshop with Central Saint Martins. She also won a heap of awards at last year’s Golden Thread.

This is just a small selection of the enormous collection. My advice to Wiola Wo?czy?ska? Edit edit edit… and have a bit more fun. Go on! It’s your chance to wow…

Having won the Golden Thread Awards earlier this year, Dominika Naziebly stepped up to the mark with another beautiful ethically produced collection that used eco fabrics such as bamboo, organic cotton and recycled materials.

Dominika Naziebly backstage before the show. All photography by Amelia Gregory.

For Cold Summer Dominika Naziebly looked at the ‘quiet combinations of forms and colours‘ to create an elegant collection centred on shades of mushroom and cream. Longer dresses were shredded to give texture, and over-sized eyelets were applied to the sheerest of tops and bottom bearing skintight shorts. The romantic garments had a decidedly modern edge, accessorised with imitation wood clutches and totes. You can see Dominika Naziebly’s previous A/W 2011 collection paraded in the Gala Dyplomowa Show.

I raced to my first Off Out Of Schedule show at Fashion Week Poland as soon as I had got off the plane and dropped my suitcase at Andels. With dark eyes, paint splatters and tailored detailing in relaxed grey fabrics, Jarosław Ewert showed a typically Polish aesthetic for men and women alike, with eyelets and asymmetrical cuts providing extra interest for both. The last outfit came with a spike hemmed waistcoat in royal blue, a colour which the designer himself clearly favours.

Karolina Gerlich was last to show at the Off Out Of Schedule shows on Thursday, with a confident collection based on the idea of a fantasy island where a perfect mix of cultures exists: hence references to kimonos in relaxed dresses with tie waists worn over blouson pants. Leggings and prints came with a camouflage/animal vibe, worn with sharp red heels. Asymmetric cuts brought together fabrics in a wonderful colour palette of coral, jade, cream and navy blue. I’d say this paradise owes a lot to the 80s – no bad thing in my book. Karolina Gerlich‘s logo is her favourite creature, a cute line drawn owl.

Kraków based Lukasz Stachowicz showed a real winner of a collection: presented in an intriguing manner that culminated in a staged tableau. Titled Robinson, he took inspiration from a subsistence lifestyle that was accessorised with real fish, their bloody guts dripping down the catwalk. Crayfish were strung in decorative manner around necks, knitwear featured giant bees and fly fishing hooks stood in as scarf pins. Book-ending the models was a lad with a burning torch, who lit a mock fire in the centre which the models gathered around. Garments were rendered in shades of cream and beige, with rope details on shoulders and waist. I particularly liked a delicate fish print that appeared on swing skirts, shorts and shirts. The headwraps worn by girls were an echo of that worn by the musician, who played enigmatic notes to accompany Robinson on a flattened circular tin drum.

In researching Lukasz Stachowicz I have realised that I didn’t see his show last season but I had been most impressed by the clothes he presented on his stand at Fashion Week Poland. How fitting then that I should delight so much in his next collection too. 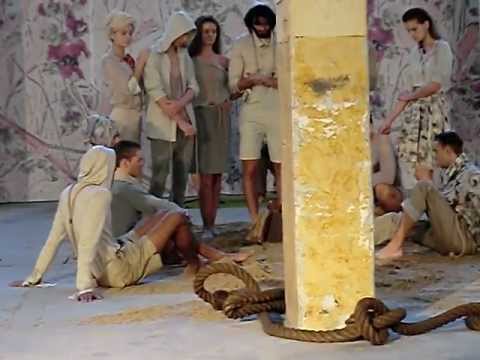 Magdalena Kubalanca‘s show featured some fabulous Geisha inspired make up with winged eyebrows as an accessory to the collection. Hair was tied in either one or two topknots (loved the Minnie Mouse effect) and Japanese dolls swung low on cords around the neck. For S/S 2012 Magdalena Kubalanca has created a strong series of outfits: a combination of structured coats and loosely draped jersey dresses with strategic holes to show a bit of tempting flesh on the waist and arms: all in a palette of pale grey blue, glossy brown, deep navy and red.

Maldoror is an off schedule favourite who cuts a dashing figure with wiry red hair in a ponytail. Shrouded in medieval-esque garments, he’s a great advert for his own clothing range. This season Maldoror drew from ideas of the Virgin Mary in medieval literature and the simplicity of clothing worn by religious fanatics such as hermits and flagellants. The resulting look is best described as medieval gothic, with huge shrouded hoods, drawstring waists, boxy loose shapes and rope ties much in evidence. Shiny polyester, lurex thread and sweaters knitted from old VHS tapes provided glistening texture in an otherwise totally black collection. Read my review of the A/W 2011 Maldoror collection here.

No comments to show.